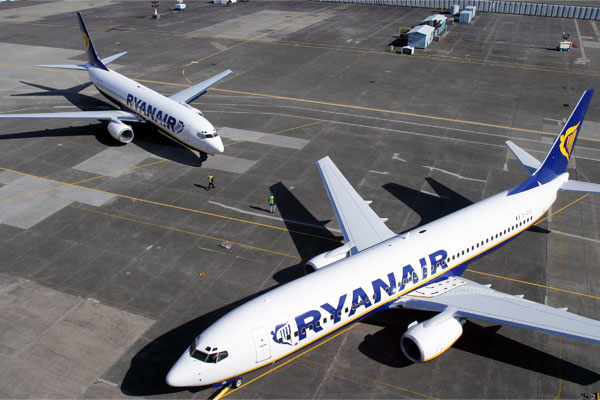 Having added 560 new routes and opened 14 bases throughout the last 12 months, Ryanair is now looking ahead to S’22 and the addition of 65 new B737-8200 ‘Gamechanger’ aircraft to its fleet, which offer 4% more seats, 16% less fuel and a 40% reduction in noise emissions.

Ryanair announced its highly anticipated UK S’22 schedule – opening 24 new routes [over 500 in total] to a host of exciting European destinations. UK holidaymakers will rejoice with sunny hotspots such as Chania, Madeira and Menorca. The opening of these 24 new routes across Ryanair’s UK network reinforces the airlines’ commitment to the UK and the rebuilding of the country’s tourism industry, playing a key role in the recovery of local jobs and economy.

Ryanair is leading Europe’s traffic recovery as the airline plans to deliver accelerated growth in both traffic and jobs over the next 5 years. Having added 560 new routes and opened 14 bases throughout the last 12 months, Ryanair is now looking ahead to S’22 and the addition of 65 new B737-8200 ‘Gamechanger’ aircraft to its fleet, which offer 4% more seats, 16% less fuel and a 40% reduction in noise emissions, making the S’22 schedule the most sustainable and environmentally friendly to date. Adding to its green credentials, Ryanair has launched electric handling at 11 major European airports – a significant investment in its sustainable operations.

Ryanair’s Director of Commercial, Jason McGuinness, said: “We are pleased to announce our UK S’22 schedule offering our customers even more amazing European destinations. Following two summers of on and off again travel restrictions, our UK customers now have 24 new routes to choose from when booking their long-awaited S’22 holidays. Whether planning a relaxing family getaway to the picturesque surroundings of Chania, an adventurous trip to the mountain hike trails of Madeira or a romantic city break to Milan, our S’22 schedule will not disappoint.

To celebrate, we have launched a limited-time seat sale for travel until the end of October ‘22, which must be booked by midnight Thursday, 25 November. With air fares set to increase by S’22 due to reduced capacity, we are encouraging our customers to book early and avail of these lower fares available only on Ryanair.com.”

Wego is an authorized Ticket Reseller for EXPO 2020