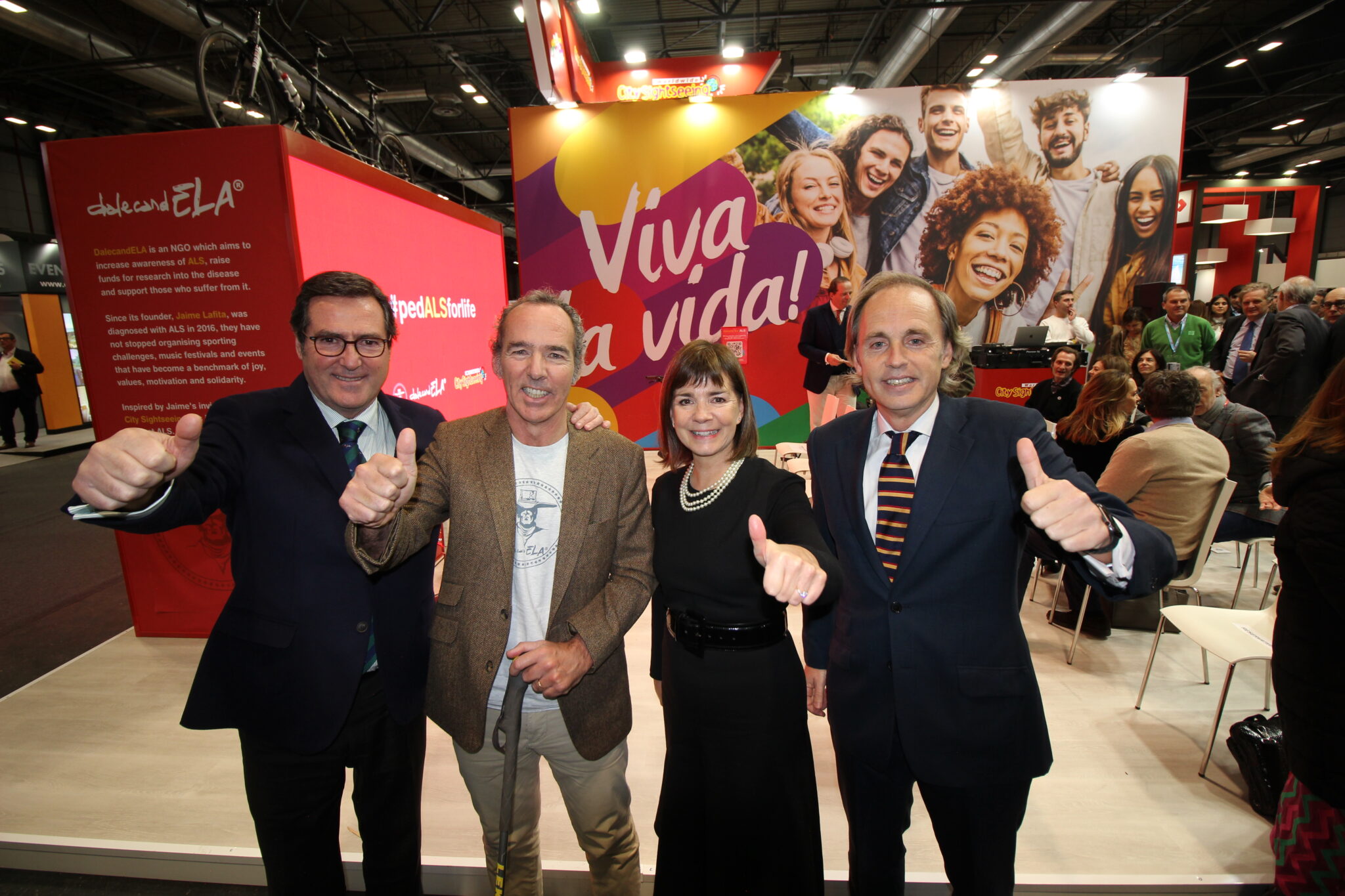 Leading open-top bus, boat, and guided walking tour company and this association are jointly launching the #pedALSforlife social media challenge at FITUR, encouraging people to give a voice to those affected by the disease and to donate to research.

MADRID – City Sightseeing Worldwide, leading open-top bus, boat and guided walking tour company, and the dalecandELA association have launched their #pedALSforlife challenge at FITUR, calling on the tourism industry to lead the fight against ALS by raising awareness on social networks and raising funds for research. The presentation of this new joint initiative was attended by the president and CEO of WTTC, Julia Simpson, and the president of the CEOE, Antonio Garamendi, who together with the founder and CEO of City Sightseeing, Enrique Ybarra, were the first to be nominated by the founder of dalecandELA, Jaime Lafita, to spread their message within the sector.

To participate in the #pedALSforlife challenge, City Sightseeing and dalecandELA encourage all tourism professionals and anyone who is aware of ALS to get on a bicycle to record a message of support for ALS sufferers, to call for greater investment in research and to raise awareness for its treatment. By sharing this message on Instagram, Facebook or Twitter, participants should use the hashtag #pedALSforlife and nominate three friends to continue the chain.

Through this initiative, the tourism industry will be able to continue symbolically pedalling on the tandem with which Jaime Lafita and his dalecandELA group went to the European Parliament in Brussels to bear the torch for ALS patients.

Donations can be made at bit.ly/pedALSforlife and all proceeds will go to research into the disease.

Jaime Lafita, founder of dalecandELA, said: “ALS is a disease for which there is still no cure, but we are hopeful that it will end up being something that will not worry our children. Having the support of the tourism industry to call for more research and treatment for sufferers will undoubtedly bring us a little closer to that day we so desperately hope for”.

Enrique Ybarra, founder and CEO of City Sightseeing, added: “At City Sightseeing, we are very close to the communities in the cities where we operate and our main mission is not only the happiness of our travellers, but also the wellbeing of people. With dalecandELA, we have already organised several charity initiatives, but this one is undoubtedly very special because we want to involve all those who are part of our sector”.

Julia Simpson, President and CEO of WTTC, commented: “The global travel and tourism industry is much more than just one of the world’s leading economic engines. It is also a collection of people and companies who are acutely aware of the planet we live on and the urgent need to preserve it and improve people’s lives. I am convinced that all of us in this sector will embrace this #pedALSforlife challenge with the utmost commitment”.