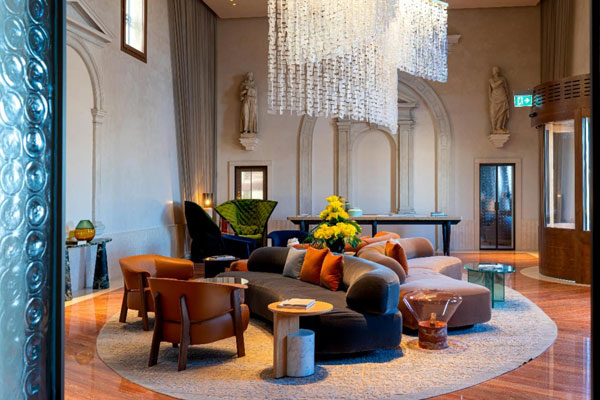 NEW YORK – This December, the building that in 2021 became Venice’s Hotel Ca’ di Dio will be celebrating its 750th anniversary, tracing its history back to the Italian Middle Ages in The Floating City.

Ca’ di Dio sits within an ancient compound built in 1272 as a refuge for pilgrims, the poor, women in distress and visitors. The “House of God” is located in the Castello district, a distinguished position overlooking the beautiful San Marco Basin. Ca’ di Dio’s site is linked to the Biennale, as it also sits at the entrance of the “Contemporary Art District.” Over the years, the palace has been renovated multiple times in order to expand its terrain, hosting an ever larger number of guests. For instance, in 1544, each individual room was successfully equipped with a kitchen and a fireplace (its chimneys can still be seen today on the building’s façade). By 1973, the complex housed 92 rooms allocated to people in need, of any gender, age and background. The palace was acquired by Alpitour Group in early 2019.

Entrusting the entire interior design project to renowned architect Patricia Urquiola, Ca’ di Dio underwent its latest restoration and redevelopment in 2021. The design concept borrows from local culture and materials, including the city’s famed Murano glass, wood, brick, stone and marble. But that is not all: the building’s internal courtyards provide visitors with a space to feel at peace, especially after days spent exploring all that Venice has to offer. The traditional gardens include two original wells and several herringbone-patterned brick paths. “The project was guided by careful research aimed at enhancing historical refinement, reinterpreted in a contemporary key,” Ca’ di Dio’s representatives affirm.

To celebrate its 750th anniversary, Ca’ di Dio’s kitchen has crafted a special new menu, focusing on the experience of traditional cuisine and mixology. Venetian-style liver pâté, sugary polenta, and fried custard are only a few of the dishes offered for the event. The themed cocktails aim to take guests back to the Middle Ages, with simple, “typical” flavors such as whisky, cinnamon, clove and pomegranate. “Cocktail 1272,” “Malvasia Nera” and “Amphora” make up the cocktail list.

Ca’ di Dio’s concept of ‘Ventessentia’ “revives the true essence of the city… which can be discovered slowly by savoring, walking, tasting and experiencing, all at once, 1600 years of history,” says Christophe Mercier, General Manager.

Mews closes $185m. in fundraising to transform the hospitality industry for brands and their guests