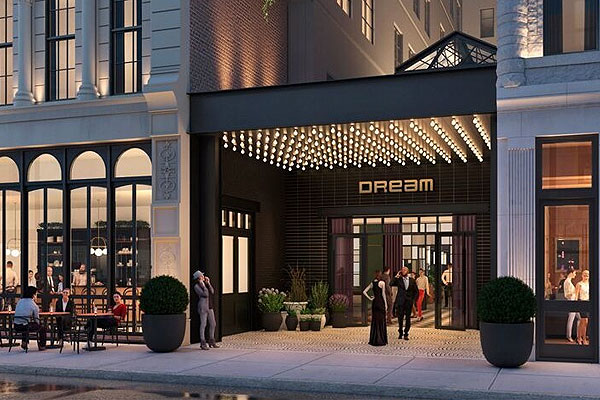 NASHVILLE, TN – Renowned hotel brand and management company Dream Hotel Group announced the appointments of six veteran hospitality executives to lead Dream Nashville, its first location in Tennessee, including: Randy Diamond as General Manager; Ella Kopfman as Director of Food & Beverage; Tyler Newell as Senior Director of Marketing; Rachael Stroop-Elias as Director of Sales; Brooke Blakely as Director of Revenue Management; and Brandon Jourdan as Controller. These new team members will be critical players in the upcoming opening of Dream Nashville in February 2019. The newest addition to the Dream Hotel Group portfolio will harvest the rich history of Nashville while maintaining the rich and colorful heritage of downtown Printer’s Alley through two reimagined landmark buildings.

“We are thrilled to welcome this team to Dream Hotel Group. Their combined innovative visions, understanding of the industry and thoughtful creativity ensure that our newest hotel will become a must-visit destination for anyone coming to Nashville,” said Jay Stein, CEO of Dream Hotel Group. “We are working with some of the top hospitality minds in the business, and we are excited to see how they bring the Dream to life in bustling Music City.”

As General Manager, Randy Diamond brings an extensive background in luxury hotels to Dream Nashville, having previously worked in top hospitality markets including Los Angeles, Chicago, Philadelphia, Houston and now Nashville. Diamond’s proven ability to launch experiential brands in new markets will be integral to the success of Dream Nashville. With more than 12 years of experience in the hospitality industry, Diamond has worked with Four Seasons Hotels & Resorts nationwide, and, most recently, served as Director of Rooms at Shutters on the Beach in Santa Monica, CA. Diamond is recognized for his ability to oversee multiple projects, teams and aspects of a hotel in any given setting.

Ella Kopfman brings 15 years of culinary experience to her new role as Director of Food & Beverage at Dream Nashville. Prior to joining Dream, she most recently served as General Manager at Northstar Cafe in Ohio, where she was responsible for hiring, training and scheduling the restaurant’s service team, as well as executive training and development of all managers across the restaurant’s eight locations. Kopfman began her culinary career with Hillstone Restaurant Group where she held several food service and beverage management roles during her four-year tenure.

With more than a decade of experience in the luxury lifestyle hospitality industry, Tyler Newell joins Dream Nashville as Senior Director of Marketing. Born and raised in Santa Monica, Newell spent his career throughout some of the most competitive markets in the world, including London, Los Angeles and most recently Miami. Newell previously worked for SBE Entertainment Group where he held the title of Regional Director of Marketing.

Rachael Stroop-Elias joins the Dream Nashville team with over 12 years of experience in the hotel industry. Her love of music, whiskey and community is what initially drew Stroop-Elias to Nashville. After arriving in Music City, she first worked at the Hermitage Hotel where she exceled in running the reservations department and managing group sales. Since then, she brought her talents to JRK Hotels, Hamister Hospitality and Hotel Indigo Nashville. Stroop-Elias is excited to bring her passion, experience in the market and competitive edge to her role as Director of Sales at Dream Nashville.

As the Director of Revenue Management for Dream Nashville, Brooke Blakely leads revenue optimization through effective revenue strategies, distribution and online marketing. Brooke has worked closely and strategically with a range of stakeholders during her 15 years of hospitality leadership experience. Prior to her time with Dream Nashville, Brooke served as the Corporate Director of Revenue Management for Journal Hotels, and has previously held senior leadership roles with ETC Hotels at Shutters on the Beach and Hotel Casa Del Mar, Viceroy Hotel Group and Langham Hotels.

As the Controller for Dream Nashville, Brandon Jourdan is responsible for the overall direction and performance of the property, including the management of all accounting and control functions. Prior to joining Dream Hotel Group, Brandon has gained over 20 years of experience during his time as Director of Finance at Westin Tampa Waterside, Stonewall Resorts and Omni Bedford Springs Resort & Spa. He previously held management positions including Controller for the Renaissance St. Louis Airport and Hilton Virginia Beach Oceanfront.

Developed by 4PANT LLC, in partnership with Dream Hotel Group, Dream Nashville will be a driving force in the ongoing restoration and revitalization of downtown Nashville. Located in historic Printers Alley at Fourth Avenue North, the 168-room hotel is expected to open with 21 suites and six experiential dining and nightlife venues in February 2019. The property pairs Earl Swensson Architects with Meyer Davis Studio for interiors and will offer extensive programming for both hotel guests and locals alike.