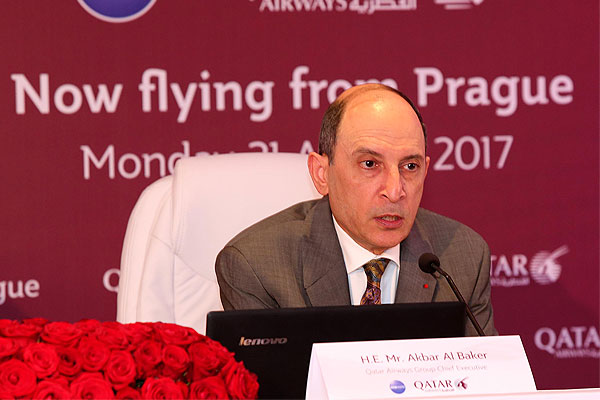 The rotating one-year term will commence at the end of IATA’s 2018 Annual General Meeting (AGM) in Sydney and will continue until the end of its 2019 AGM. H.E. Mr. Al Baker will succeed current IATA BoG Chairman Mr. Goh Choon Phong, Chief Executive Officer of Singapore Airlines.

H.E. Mr. Al Baker said: “I am honoured to have been chosen by my fellow board members to head this important body, at a time when the industry faces numerous challenges on a multitude of levels. To represent and lead the IATA Board of Governors is a tremendous privilege, and I am grateful for the opportunity to represent an industry that plays such a vital role in the global economy.

"For more than two decades I have lived and breathed aviation, and I look forward to working alongside the Board of Governors to champion passenger rights and improve security standards across the industry, as well as continuing to promote the rights of freedom of flight for all."

IATA represents some 275 airlines comprising 83 per cent of global air traffic. The election of H.E. Mr. Al Baker to this prestigious post is a clear recognition of the leading role that he plays in a dynamic and highly competitive industry.

H.E. Mr. Al Baker is one of the most recognisable figures in international aviation. His vision and commitment enabled the development of Qatar Airways from a small regional carrier into a major global airline in a span of just 20 years. Under his leadership, Qatar Airways has become one of the world’s most highly-respected airlines, competing on a scale very few airlines achieve. Passengers have recognised the airline’s commitment to the values of safety, security, innovation and quality of service by awarding it the Skytrax Airline of the Year 2017, the fourth time it has received this award.

Qatar Airways is widely known for its relentless pursuit of innovation, and recently introduced its award-winning new Business Class seat, Qsuite, featuring the industry’s first-ever double bed available in Business Class, with privacy panels that stow away, allowing passengers in adjoining seats to create their own private room. Adjustable panels and movable TV monitors on the centre four seats give colleagues, friends or families travelling together the option to transform their space into a private suite, where they can work, dine and socialise together. These new features provide the ultimate customisable travel experience that enables passengers to create an environment that suits their own unique needs.

The national carrier of the State of Qatar is one of the fastest-growing airlines operating one of the youngest fleets in the world. Now in its twentieth year of operations, Qatar Airways has a modern fleet of 200 aircraft flying to business and leisure destinations across six continents.

In addition to being voted Airline of the Year by travellers from around the world, Qatar’s national carrier also won a raft of other major awards at the Skytrax 2017 ceremony, including Best Airline in the Middle East, World’s Best Business Class and World’s Best First Class Airline Lounge.

Qatar Airways will be adding flights to many more exciting destinations to its network in 2017 and 2018, including Abidjan, Ivory Coast; Accra, Ghana; Canberra, Australia; Chiang Mai, Thailand; Utapao, Thailand; Chittagong, Bangladesh and Mombasa, Kenya, to name a few.