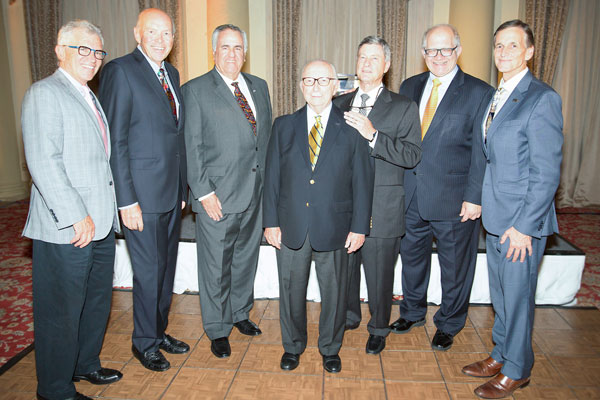 Burt Cabanas was previously honored by Florida International University with the FIU Torch Award as well as the FIU Medallion Award, recognizing his active and long-term involvement as chairman of the Chaplin School of Hospitality & Tourism Management Industry Advisory Board.

THE WOODLANDS (HOUSTON), TEXAS – Burt Cabanas, founder and chairman of Benchmark, a global hospitality company, has been named chairman of the Florida International University (FIU) Foundation. A 1976 graduate of FIU’s Chaplin School of Hospitality & Tourism Management, Mr. Cabanas served on FIU’s Chaplin School Industry Advisory Board from 2002 – 2014 and in the role of Chairman from 2009 – 2014. He joined the FIU Foundation Board in 2014, serving as vice chair from 2018-2020, and becoming chairman this year.

"It is an honor to serve in this capacity and give back to an industry and to a university that has been incredibly important in my life," said Mr. Cabanas, "I'm not aware of another industry that can enable an immigrant, through hard work and determination, to rise from lifeguard to building one of the nation's largest independent hospitality management companies, and help launch a new industry – conference centers. Forty-four years ago I graduated from FIU's Chaplin School of Hospitality and Tourism Management and 40 years ago I started Benchmark Global Hospitality. I put much of what I learned at FIU to work in building my career and our company, and helping establish the global conference center industry and the association that supports it – the International Association of Conference Centres (IACC)."

Many years ago, Burt Cabanas was asked to the join the Chaplin School's Industry Advisory Board of Directors and six years ago to join the FIU Foundation. “I leapt at the opportunity to give back to FIU and am immensely honored to have been appointed Chairman of the FIU Foundation Board. Our hope is to grow the Foundation's resources substantially so many more students have the opportunity to receive the best education possible, and go out into the world to actively contribute to the development of the hospitality industry, the meetings industry, medicine, business, science, engineering, or any industry they choose to be a part of. This is our goal."

“My work with the FIU Foundation really is the culmination of my career,” said Burt Cabanas. “To be able to support the next generation of meeting, event and hotel professionals – particularly those with few financial resources but a strong drive for career success – is immensely important and satisfying to me.”

Mr. Cabanas’ fellow hospitality executive, Eric Pfeffer, now president of The Pfeffer Group in North Miami, agrees, demonstrating the importance supporting FIU’s students’ financial needs with active involvement in the Rocco Angelo Endowment and support of the FIU Foundation. Mr. Pfeffer points to career mentors including and especially Rocco Angelo as critical to his own highly distinguished hotel career and reflected on the importance to current FIU students of all social-economic backgrounds.

"Rocco was instrumental in my career choices," said Eric Pfeffer. "After graduation from FIU, I was contemplating an opportunity to join a management training program with Howard Johnson's flagship property, and simultaneously an opportunity came my way for a similar program with Westin at New York's prestigious Plaza Hotel.” Mr. Angelo advised Mr. Pfeffer to consider pursuing career “opportunity verses glamour”. He said that someone would have to be the president of Howard Johnson one day. His wisdom helped guide Eric Pfeffer in that decision and in 15 years he was indeed president of the Howard Johnson organization, subsequently becoming chairman of Wyndham Worldwide. “Still on the FIU staff, Rocco Angelo, his Endowment and the FIU Foundation will benefit students immeasurably going forward.”

Burt Cabanas has a solid foundation of leadership experience to draw on for his new role as chairman of the FIU Foundation, having founded Benchmark Global Hospitality in 1980, which is today recognized as a global leader in the management and marketing of conference centers, hotels and resorts. The company has grown to 80 luxury properties in the United States and internationally. Mr. Cabanas began his hospitality career as a teenager, working as a lifeguard for Miami Beach’s Shelborne Hotel, having immigrated from Cuba with his mother just a few years prior.

Additionally, Burt Cabanas is a founding board member, past president, and active supporter of IACC, the global conference industry's thought leader on the meeting experience.  In 1988, IACC presented him with the Mel Hosansky Distinguished Service Award in recognition of his outstanding service to the association and to the conference center industry globally.

Burt Cabanas was previously honored by Florida International University with the FIU Torch Award as well as the FIU Medallion Award, recognizing his active and long-term involvement as chairman of the Chaplin School of Hospitality & Tourism Management Industry Advisory Board. The FIU Alumni Association honored him with the prestigious “Alumnus of the Year Award”. Mr. Cabanas individually and through his company is an active supporter of initiatives designed to assist and recognize US Military personnel and their families, including the Texas Marine Medal of Honor Fund.  He is the author of Benchmarking: A Life in Business.