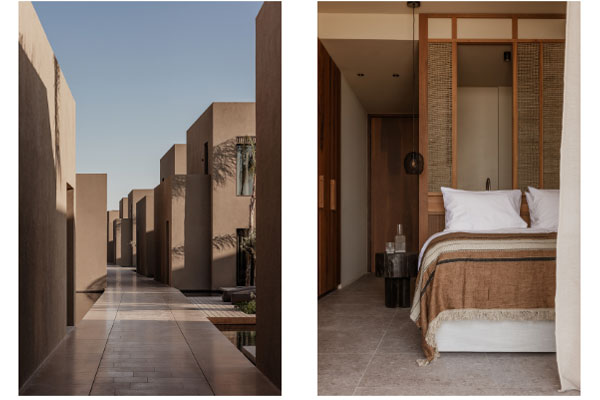 Opened in May 2022, Casa Cook Samos is the latest addition to Casa Cook’s popular array of boutique hotels. Nestled in the island’s lush landscape this 128-room adults-only retreat offers the brand’s trademark laid-back luxury in one of the Mediterranean’s most stunning surroundings.

The newly opened Casa Cook Samos in Greece is the winner of the Hotel Design Award 2022. The prize was awarded on Monday 6 June at the 196+ forum in Milan, hosted by PKF hospitality.

Andreas Martin, Jury Chairman at 196+ forum Milan, commented on the award: "It was the clear yet restrained design of the resort, proposed and implemented by the Athens-based architecture firm Block 722, using predominantly local construction and furnishing materials, that convinced the jury at 196+ that Casa Cook was most worthy of this prize.”

The jury referenced the vision of the hotel’s design company of maintaining the essence of a Samian village character, but with a modern interpretation, as a winning aspect.

Opened in May 2022, Casa Cook Samos is the latest addition to Casa Cook’s popular array of boutique hotels. Nestled in the island’s lush landscape this 128-room adults-only retreat offers the brand’s trademark laid-back luxury in one of the Mediterranean's most stunning surroundings. Inspired by traditional Greek houses, or Kamares, found in Samian villages, the hotel’s architecture is down-to-earth and inclusive. The historic concept of a Grecian village has been embodied in the modern space, where the hotel’s infinite swimming pools act as the town centre of each small ‘neighbourhood’ within the hotel.

The Vice-President of Fosun Tourism Group, the brand owner, Alessandro Dassi, comments: “Incorporating local cultural elements into our modern hotel design style is a key element of our brand philosophy, and Casa Cook Samos has taken this to the next level. This award is the fruit of a massive team effort that would not have been possible without the dedication and support of the owning company, Velos Tourism.”

A total of 15 hotel applications, from nine European countries, were submitted for the award. In determining the winning hotels, the jury looked at the originality of the architectural and design concept, the associated architectural quality of the building and facade and the design of the interior.

The head of Velos Tourism, the owning company, Orestis Valis, who received the award, said: “It all started with an idea for a new luxury resort on the island. We wanted to do something modern, while remaining loyal to the heritage of the local community. Thanks to the creative partnership with Block 722 and the Casa Cook team we were not only able to realise our vision, but also delivered a first class beach resort offering in unique surroundings.”