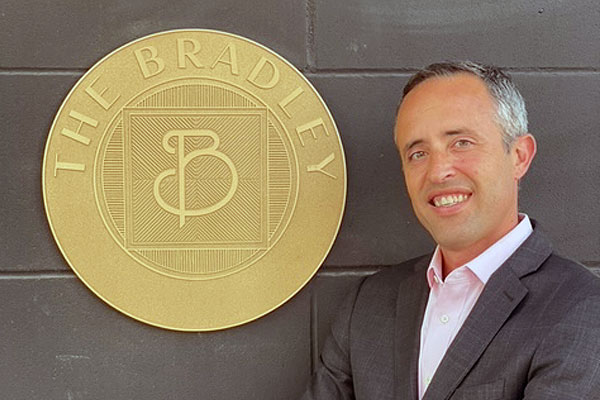 FORT WAYNE, IN – Portland-based hotel owner and operator, Provenance Hotels announce the appointment of Brent Pope as General Manager of The Bradley. As a Fort Wayne native, Pope returns to his hometown to oversee all operations of the newly opened boutique hotel.

Recently debuted in July 2021, The Bradley is a collaborative vision of Provenance Hotels and Barbara Bradley Baekgaard, co-founder of the iconic global lifestyle brand, Vera Bradley. The 124-room hotel serves as the city’s epicenter of entertaining and hospitality with distinct offerings and amenities such as Birdie’s its lively rooftop bar, and its latest addition Arbor, a fine dining restaurant that is a modern take on the quintessential offerings of Northern Italy combined with the classic American steakhouse.

With almost two decades of hospitality experience working with national brand in various cities including Radisson Atlanta, W Chicago City Center and the Sandpearl Resort in Clearwater Beach, Florida, Pope brings a wealth of expertise to The Bradley. In 2009 he became the General Manager of Emerald Greens Condo Resort in Tampa, which was ranked the city’s number one hotel by TripAdvisor under his leadership. He most recently served as General Manager of the Courtyard and Fairfield hotels in Noblesville, Indiana working for Midwest Hospitality Group (MHG).

“It’s an honor and a privilege to return to Fort Wayne to join the team at The Bradley,” said Pope. “I am extremely excited to be working at such an incredible hotel in a city that has so much positive momentum right now. Downtown Fort Wayne has turned into a remarkable destination for people to visit and I look forward to helping continue its upwards trajectory.”

Pope is a graduate of Purdue University, where he received a degree in Hospitality and Tourism Management. He lives in Fort Wayne with his wife and four sons and enjoys running, golfing, and spending quality time with his family.

The 4th edition of “The Digital Gate IV: The Airport Innovation Challenge” is here