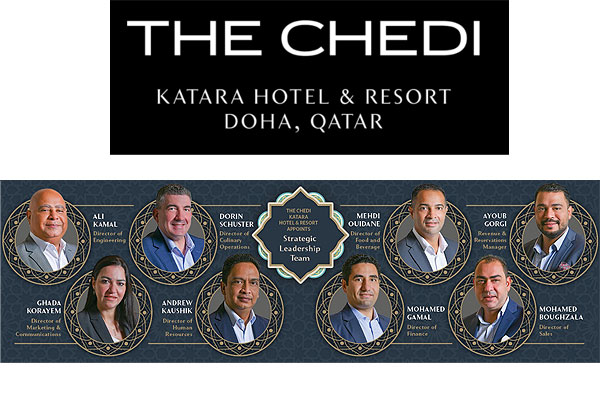 A stellar cast of veteran hospitality professionals will orchestrate the opening of Doha’s new beachfront landmark at the Katara Cultural Village.

SINGAPORE – The Chedi Katara Hotel & Resort, Doha, managed by General Hotel Management Ltd (GHM), the inimitable creator of stylish hotels and resorts worldwide, announced its roster of executive appointments to lead the 91-key hotel ahead of its opening in November 2022.

Following the appointments of Morton Johnston as general manager and Ali Moussa as director of sales and marketing, The Chedi Katara Hotel & Resort has created a strategic leadership team comprising veterans of the hospitality industry for its debut.

“In our commitment to deliver A Style to Remember, we spared no effort in recruiting the best team of international and local talents to provide our discerning guests with the unparalleled service excellence that GHM is known for. I am confident that my executive team will set a new benchmark at this modern-day palace by curating unforgettable experiences,” said Morton Johnston, general manager, The Chedi Katara Hotel & Resort.

Andrew Kaushik, Director of Human Resources
Andrew embarked on his human resources career path in the hospitality industry in 2000, where he rose through the ranks in some of the most recognized international hotel groups in the Middle East and India.  His core belief in being a guardian of creating memories at every touchpoint of an employee cycle to create an engaged workforce, which in turn builds strong brand ambassadors, led him to win the World HRD Congress Most Influential HR Professional in the Middle East 2019 and Qatar in 2020. He was also recognized as one of the World HRD Congress’ Top 100 Minds in Hospitality nationally in 2017, as well as Top 50 HR Professionals in Telangana state in 2018.

Dorin Schuster, Director of Culinary Operations
Dorin is no stranger to the GHM family as he arrives from The Chedi Muscat. A certified Master Chef with over 30 years of experience, Dorin began his illustrious career at five-star institutions in his home country, including the Michelin-starred Landhotel Schlosswirtschaft Illereichen and the iconic Hotel Adlon in Berlin, Germany. Prior to moving to the Middle East, he honed his skills in Southeast Asia where he was recognized for the successful opening and operation of Iggy’s in Singapore, voted ‘Best New Restaurant’ at the 2006 World Gourmet Summit. He was also awarded the San Pellegrino ‘Chef of the Year’ award in 2007. The restaurant was voted 4th best in Asia in 2006 and No. 60 in the world in 2007 by UK Restaurant Magazine. His Asian journey also included Bali, Indonesia where he lived for nearly a decade.  In 2017, Dorin joined the GHM family as Executive Chef at The Chedi Muscat where his success led the team at The Restaurant to win Best Fine Dining – Oman Restaurant Awards in 2018, 2019 and 2020.

Mohamed Gamal, Director of Finance
Mohamed brings over a decade of financial expertise from his years of experience at Four Seasons Hotel Doha and Four Seasons Hotel Riyadh. His strength lies in his detailed understanding of hospitality industry standards and his meticulous approach to operational best practices, as well as his valuable experience in all aspects of the department from accounting, cost control, financial reporting, forecasting, and budgeting. As a leader, Mohamed believes in providing support to his team through training, open communication, coaching and consulting to develop and enhance their productivity and contribution, earning him the impressive reputation for execution and achieving results.

Ali Mohamed Kamal El Din, Director of Engineering
Ali has extensive technical skills and leadership expertise in the hospitality sphere, chalking up over two decades of pre-opening and operational experience working in several five-star groups in both his home country of Egypt and in Qatar.  A hands-on engineer who is also passionate about energy conservation, Ali will be focused on supporting the hotel with implementing sustainable and environmentally friendly solutions. Prior to his move to The Chedi Katara Hotel & Resort, Ali headed up the engineering team at InterContinental Doha Beach & Spa in the same capacity.

Commercial Leads in the Sales & Marketing Division
Ghada Korayem, Director of Marketing & Communications, will champion the hotel property’s public relations, corporate communications and business development initiatives for the new hotel.  Prior to joining The Chedi Katara Hotel & Resort, she was part of the pre-opening team of Banyan Tree Doha, first property under the Banyan Tree-Accor partnership, as Director of Marketing.

Mohamed Boughzala, Director of Sales, brings a wealth of experience in delivering commercial success that accentuate performance, long-lasting client relationships and leverage of new revenue opportunities. The strength of his sales network is developed through two decades experience in the GCC at luxury hotels such Park Hyatt Doha, Andaz Dubai The Palm and Grand Hyatt Dubai to name a few.

Ayoub Gorgi, Revenue & Reservations Manager, will oversee the process improvement of all revenue functions for The Chedi Katara Resort & Hotel. Ayoub is well versed with the Qatar market having lived in Doha for over a decade and has worked with several luxury groups such as Anantara, Hilton and Tivoli.

GHM celebrates debut in Qatar with unveiling of The Chedi Katara