The reasons why fossil tourism is so popular in Morocco

Morocco has an abundance of fossils, perhaps more than any other country. This is due to the Sahara Desert and the ocean that once thrived there.

Morocco is one of the world’s most desirable travel destinations, visited mostly for its rich culture, beautiful architecture, and ancient history. Morocco’s arid, mountainous landscape is not just home to the nomadic Berber people, who are responsible for creating one of Morocco’s chief exports: carpets. It is also home to numerous fossil deposits, some of which date to the pre-Cambrian period.

If you are fascinated by geology, then Morocco should be at the top of your list of places to visit. This article will break down in great detail why fossil tourism is becoming so popular in Morocco today:

Where is Morocco?
Morocco is located in North Africa’s Maghreb region and sits beside the Mediterranean Sea. Morocco borders Algeria and the territory of Western Sahara. Morocco’s official languages are Arabic and Berber. French is also widely spoken, due to France’s long occupation of Morocco.

Morocco has been inhabited since the Palaeolithic Era, which was over 90,000 years ago. Some researchers have even suggested that humans lived in Morocco earlier than that. They cite Homo sapiens fossils found in the Jebel Irhoud area, dating to 315,000 years ago, as their evidence for this. During the Upper Paleolithic area, the entire Maghreb area was much more fertile than it is now, making it the ideal location for human inhabitation. The chances of finding Homo sapiens fossils on your visit to Morocco are slim, however. It is possible to find trilobite fossils though, which we will address in greater detail later. One can also order these fossils directly from Morocco if travelling there is not possible at this current time.

The Sahara Ocean
The Sahara Desert is the world’s largest desert. The Sahara begins in Morocco. At one point, an ocean 50 metres deep covered up to 3,000sq km of what is today the Sahara Desert. Some of history’s largest sea snakes, catfish, sharks, and marine life lived in this ocean, as well as a number of extinct aquatic species. The Sahara is now filled with fossils, which are found in this once great ocean’s marine sediment.

In addition to species like sea snakes, sharks, and catfish, creatures called orthoceras, trilobites, and ammonites could be found in this ocean. An orthoceras was an ancient mollusc that had a squid-like body, housed inside a thick cone shell. Trilobites were a type of invertebrate with an armoured shell, that scavenged and dug for food on the ocean’s floor. Amazingly, trilobites were able to survive two mass extinctions. Ammonites, like orthoceras, were a type of mollusc, with coiled external shells. They have been compared in appearance to the modern nautilus.

Other sea animals that thrived in the Sahara Ocean include extinct Crocodyliformes, amiidae, and serpents. Some of the sea snakes that once lived in this ocean were over 40-feet long. There were also catfish that were over five feet long, which is incredible when compared to the typical size of a catfish today, which is around four feet.

Dinosaur Fossils
In addition to sea animals, it is also possible to find dinosaur fossils in Morocco. In fact, compared to other countries dinosaur fossils are quite common in Morocco. While intact fossils or those in good condition are rare, it is possible to find fragmented fossils, or teeth and bone fragments. Scientists say that the reason teeth are so commonly found in Morocco is that, like crocodiles, dinosaurs lost and regrew their teeth throughout their life. If you visit a fossil dig on a tour, you may end up witnessing a dinosaur’s tooth being pulled out of the ground. 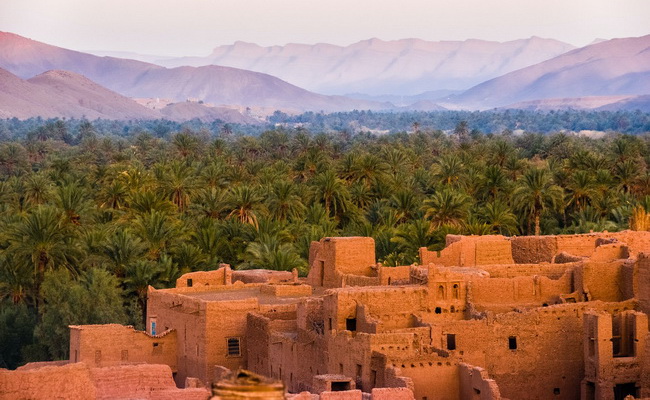 Photo by Sergey Pesterev on Unsplash

Fossil mining
Mining for fossils in Morocco is an arduous task, especially when one considers the fact that for a fossil to be sold as a work of art or scientific curiosity, it must be perfectly intact. This means that miners have to painstakingly dig and remove fossils without causing any damage to them. Most of Morocco’s fossil mining is performed by Berber tribesmen, who dig out large trenches, and with picks, chisels, and shovels, mine away searching for fossils. Once the fossils have been extracted from the ground, they are cleaned by locals and sold. They are typically sold at markets or in souks directly to tourists.

Out of all of the fossils that are found in Morocco, trilobites are the most common. Orthoceras are also very often found, usually in huge numbers. Orthoceras are typically found in black limestone. This limestone is sometimes turned into furniture, which is sold for a very high price to collectors. It is possible to purchase this furniture online or to buy it in Morocco and export it internationally.

Fossil tourism
Because of Morocco’s huge fossil and mineral deposits, fossil tourism is on the rise. There are many tour agencies that will take tourists directly to the Berber mines. It is possible for tourists to buy fossils fresh out of the ground in these places, although they can be costly. Often, the best place for one to purchase fossils is online. This is because it is easier to deal with middlemen than the miners themselves, who inflate prices for tourists. Paradoxically it is cheaper to purchase these fossils online or from souks than it is to buy them from the miners themselves. Fossil tours are increasing in popularity despite this because they give tourists an opportunity to witness the mining first hand.

Visiting Morocco
Visiting Morocco at this time is notoriously difficult, due to the coronavirus pandemic. Unfortunately, Morocco has suspended travel to and from certain countries, including the United Kingdom and Germany. In order to enter Morocco, one must be fully vaccinated, otherwise, it is not possible. As the pandemic slows down and the virus becomes less virulent as it appears to be doing, it is likely that tourism will resume in Morocco. There is lots more to see than just fossils, including architecture, textiles, and Morocco’s delicious food. Be sure to take all of that into consideration on your trip there.

Morocco has an abundance of fossils, perhaps more than any other country. This is due to the Sahara Desert and the ocean that once thrived there. It is possible to buy Moroccan fossils online. Doing so is much easier than visiting at this time, because of the pandemic.