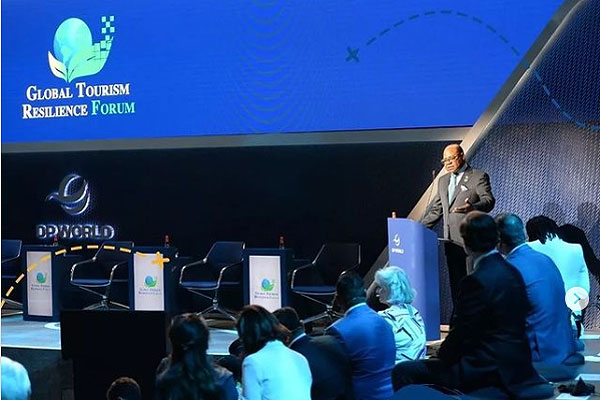 AMMAN – Ministers of Tourism, Hon Edmund Bartlett and Hon Najib Balala arrived in Amman to meet with Minister Al Fayez of Jordan to inaugurate the Global Tourism Resilience and Disaster Management Centre-MENA at Middle East University to be referred to as the Taleb Rifai Centre under the leadership of Professor Salam Almahadin, President of the University. The agreement was signed at a ceremony held on the University’s campus with all Ministers present and a large contingent of travel sector leaders. This is the sixth such satellite Centre to open, an initiative of its Co-Chairs, Edmund Bartlett and Dr. Rifai.

The GTRCMC model requires partnership with an outstanding institution of higher learning, namely a well-situated university with scope inclusive of management, research, innovation, civics, policy creation and international development. Middle East University is an outstanding partner and will be the regional driver for further expansion in the Middle East and North Africa. Opened in 2005, MEU has 9 faculties, 24 departments, 185 professors, 5,000 students, 26 undergraduate and 9 Master degree subjects.

The University will host the Taleb Rifai Centre and strive to constantly deliver an academically rigorous environment that will identify solutions and communicate widely. The University will seek funding to conduct research and develop policies in tourism resilience and crisis management, provide capacity building for the tourism sector as well as any related sectors, and provide tool­ kits and guidelines on tourism resilience. It will utilize its professional relations with other universities across the region and beyond to establish bilateral, multilateral projects and exchange programs,” explained Professor Almahadin.

In Dubai, on February 17, the GTRCMC signed and launched partnerships with Canadian and Bulgarian schools of higher learning. In Toronto, George Brown College has 7 academic centres and school locations. It is located on the traditional territory of the Mississauga’s of the Credit First Nation and other Indigenous peoples. The College’s sharing of this land exemplifies the treaty between people who learn, work and live in the community with each other.

In Bulgaria, the 100-year-old University of National and World Economy which is the oldest and largest school of economics in Bulgaria and South-east Europe was the selected partner under the tutelage of MP and former Tourism Minister, Nikolina Angelkova. UNWE has 8 faculties, 34 departments, 500 lecturers, 43 bachelor’s degree programs and 88 Master degree specialties with 41 PhD programs available for 22,000 students and is located in the heart of Sophia.

“The students at all these universities are critical to the program’s success, in that it starts with research, understanding and developing the regional risk profile, recommending best practices to influence policy-making based on empirical data and other success-based programs,” Minister Bartlett elaborated. “It’s a 5-step program starting with the youth: research, evaluate, mitigate, respond and recover,” stated the Hon Edmund Bartlett, Co-Chair of the GTRCMC.”

His Excellency, Minister Al-Fayez of Jordan, added, “We welcome the inception of the Taleb Rifai Centre here at the Middle East University. We trust that this initiative will play a key role in delivering resilience, robustness and agility to the tourism industry which is one of the most important sectors in the Jordanian economy through its 13% contribution to GDP.”

Deal-making activity in travel & tourism sector down by 27% in January 2022, finds GlobalData