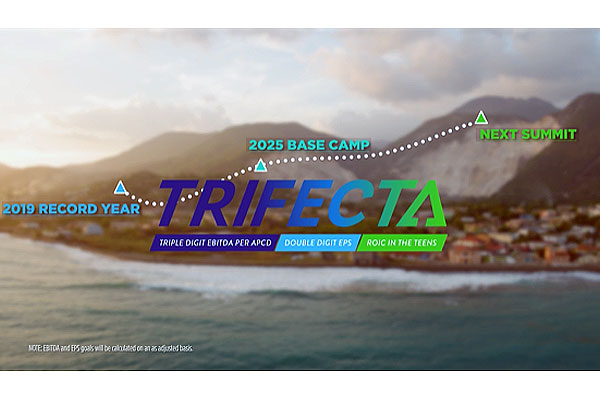 The Trifecta Program is a three-year financial performance initiative designed to chart out the pathway back to superior performance.

MIAMI – Royal Caribbean Group reported third quarter 2022 Earnings per Share of $0.13 and Adjusted Earnings per Share of  $0.26. Third quarter results were better than expected and above guidance for the quarter mainly due to higher load factors from strong close-in demand, further improvement in onboard revenue and better cost performance. The Group also introduced the Trifecta Program, a new three-year initiative designed to drive superior performance.

"Last quarter's better than expected performance was a result of the continued robust demand environment and strong execution by our teams," said Jason Liberty, president and chief executive officer of Royal Caribbean Group. "The combination of our leading global brands, the best and most innovative fleet in the industry, our nimble global sourcing platform and the very best people have delivered a successful return of our business to full operations and positions us well to deliver record yields and adjusted EBITDA in 2023," added Liberty. "The Trifecta Program provides us the financial coordinates we are looking to achieve over the next three years. As we have demonstrated in the past, we expect the formula of moderate yield growth, strong cost discipline, and moderate growth of our fleet will deliver a strong financial profile."

Business Highlights
– Load factors in the third quarter were 96% overall, with Caribbean sailings reaching almost 105%.
– Total Revenue in the third quarter was $3.0 billion, Net Income was $33.0 million and Adjusted EBITDA was $742.3 million.
– Booking volumes in the third quarter accelerated versus the second quarter of 2022 and remained significantly higher than booking volumes received in the third quarter of 2019 for all future sailings.
– For 2023, all quarters are currently booked well within historical ranges at record pricing.
– During the third quarter, the company addressed $5.6 billion of its 2022 and 2023 debt maturities, resulting in $0.1 billion and $2.1 billion of maturities remaining in 2022 and 2023, respectively.
– Based on continued strength in consumer demand and typical load factor seasonality, the company expects fourth quarter load factors to be similar to third quarter overall, and to reach triple digits by year-end.
– For the fourth quarter of 2022, based on current currency exchange rates, fuel rates and interest rates, the company expects to generate Total – Revenue of approximately $2.6 billion, Adjusted EBITDA of $350 – $400 million and Adjusted Loss per Share of ($1.30) – ($1.50).
– The Trifecta Program is designed to achieve three important financial goals by the end of 2025: increasing Adjusted EBITDA per APCD to triple digits, increasing Adjusted EPS to double digits, and achieving ROIC in the teens, while in parallel returning to an investment grade profile and reducing carbon intensity by double digits as compared to 2019.

Third quarter load factors were 96% overall and almost 105% for Caribbean Sailings. As expected, total revenues per passenger cruise day were flat as reported and up 1%  in constant currency versus the third quarter of 2019 despite the negative impact from the redemption of future cruise certificates (FCCs) and lower than average load factors on high priced Europe itineraries.

NCC, excluding fuel, per APCD for the fourth quarter is expected to be higher by low to mid-single digits compared to the fourth quarter of 2019, all on a constant currency basis. The company still expects to have transitory costs in the fourth quarter, but are expected to normalize as the company is nearing full occupancies, full crew staffing levels, and adapting protocols. The improvement is partially offset by inflationary and supply chain challenges, mainly related to fuel and food costs, that are expected to continue to weigh on costs through the rest of this year and through the first half of 2023.

Update on Bookings
Booking volumes in the third quarter were significantly higher than the corresponding period in 2019. This improvement in bookings was helped by the easing of testing and vaccination protocols which now align more closely with the broader travel industry, allowing everyone to enjoy a cruise vacation.

Guests continue to make their cruise reservations closer to sailing than in the past, resulting in about 50% more bookings in the third quarter for current year sailings when compared to the third quarter of 2019.

While 2022 bookings remain strong and on pace to achieve occupancy targets, the most notable change has been a substantial acceleration in demand for 2023 sailings. Booking volumes for 2023 doubled during the third quarter when compared to the second quarter and were considerably higher than bookings for 2020 sailings during the comparable period in 2019, the highest in company history.

As of September 30, 2022, the Group's customer deposit balance was $3.8 billion, reflecting typical seasonality as peak summer sailing deposits have been recognized in revenue. In the third quarter, approximately 95% of total bookings were new versus FCC redemptions.

Trifecta Program
The Trifecta Program is a three-year financial performance initiative designed to chart out the pathway back to superior performance with three main goals to be achieved by the end of 2025:
– Triple Digit Adjusted EBITDA per APCD, to exceed prior record Adjusted EBITDA per APCD of $87 in 2019.
– Double Digit Adjusted Earnings per Share to exceed the prior record Adjusted Earnings per Share of $9.54 in 2019.
– Return on Invested Capital ("ROIC") in the teens to exceed the prior record ROIC of 10.5% in 2019 through optimizing capital allocation and enhancing operating income.

…all while returning to an investment grade profile and reducing carbon intensity by double digits compared to 2019.
To achieve these goals, the company expects to execute its proven formula of moderate capacity growth, moderate yield growth, and strong cost controls, all while ensuring disciplined capital allocation, investing in the future and improving the balance sheet.

"Our brands, vacation offerings and fleet have never been stronger and we are well positioned for continued step change in financial performance," said Liberty. "Our proven formula for success is unchanged as we grow capacity and, enhance profitability while seeking to deliver superior shareholder return."

Liquidity and Financing Arrangements
As of September 30, 2022, the Group's liquidity position was $3.1 billion, which includes cash and cash equivalents, undrawn revolving credit facility capacity, and a $700 million commitment for a 364-day term loan facility.

"During the third quarter, we took a series of proactive actions to methodically address a significant amount of our 2022 and 2023 debt maturities," said Naftali Holtz, chief financial officer, Royal Caribbean Group. "Our strong near term liquidity enables us to focus on continuing to improve the balance sheet as we seek to return to an investment grade profile."

In September, the company repaid its $650 million 5.25% bond due November 2022 utilizing proceeds from the unsecured offering completed in August 2022.

Fuel Expense
Bunker pricing, net of hedging, for the third quarter was $777 per metric ton and consumption was 407,000 metric tons.

Capital Expenditures
Capital expenditures for the fourth quarter of 2022 are expected to be approximately $0.3 billion.

Based on current currency exchange rates and fuel rates, the company expects Adjusted EBITDA of $350 — $400 million in the fourth quarter of 2022.

Depreciation and amortization expenses for the fourth quarter of 2022 are expected to be in the range of $355 — $365 million.

Net interest expense, excluding expected loss on extinguishment of debt for the fourth quarter of 2022, based on current interest rates, is expected to be in the range of $355 — $365 million. Approximately 75% of the company's debt is tied to fixed interest rates.

Based on current currency exchange rates, fuel rates and interest rates, the Group expects Adjusted Loss per Share for the fourth quarter of ($1.30) – ($1.50).

2023 Outlook
The company is experiencing strong early booking trends for 2023 and all quarters are currently booked well within historical ranges at record pricing. The market response to the 9 new ships that joined the fleet since 2019, and the ships that will be delivered in 2023, has been excellent. While still early in the booking cycle, the view for 2023 is encouraging and the company expects a return to historical load factors in early summer, record yields and adjusted EBITDA for 2023. The company expects to benefit from lower transitory expenses and accelerating benefit from actions taken to improve margin while partially mitigating continued inflationary pressures expected to persist through the first half of 2023.