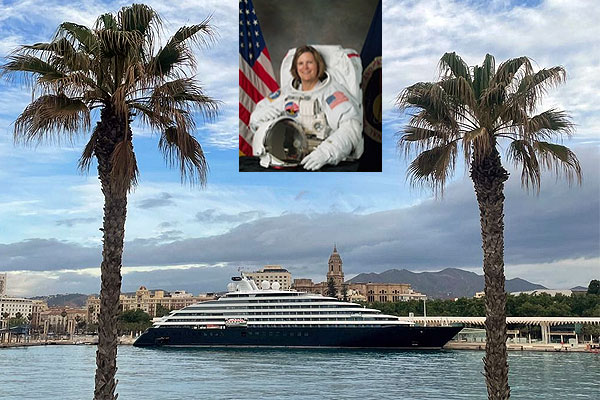 Recognized as a true pioneer in her field, the American geologist and oceanographer is the perfect individual to take on the illustrious role of Godmother. She will officially christen Scenic Eclipse II – at a ceremony in Malaga, Spain on 3 June 2023.

HOLLYWOOD, FL & VANCOUVER, B.C. – She has traveled into space three times as one of NASA’s first female astronauts, is the first American woman to complete a spacewalk, and the first person to both orbit the Earth and dive to the Challenger Deep, the deepest point in the Earth’s oceans, earning her the title of the “World’s Most Vertical Person”. Now acclaimed NASA scientist Dr Kathy Sullivan has another first to celebrate, being named Godmother to Scenic’s new ultra-luxury Discovery Yacht, Scenic Eclipse II.

Recognized as a true pioneer in her field, the American geologist and oceanographer is the perfect individual to take on the illustrious role of Godmother. She will officially christen Scenic Eclipse II – at a ceremony in Malaga, Spain on 3 June 2023.

“We are immensely proud to have Dr. Sullivan as Godmother to Scenic Eclipse II,” offered Chief Sales & Marketing Officer Scenic Group, Anna Wolfsteiner. “She truly is the living embodiment of what our yachts stand for – pushing boundaries, making discoveries and reveling in a sense of adventure. Throughout her career, Dr. Sullivan has grasped life’s opportunities and committed herself to advancing our knowledge of the world around us. We believe the guests who travel aboard our Discovery Yachts share that same passion and curiosity to explore and learn.”

“It’s a high honor to be a ship’s Godmother,” said Dr. Sullivan upon accepting the role. “I’m especially delighted to be Godmother to a vessel as well-designed for exploration and discovery as Scenic Eclipse II.”

Scenic Eclipse II joins the Discovery Yacht fleet in mid-April 2023, with the naming ceremony taking place in June 2023 after a series of immersive sailings exploring the charming ports and villages of the Mediterranean, many of which are inaccessible to larger cruise ships.

Dr Sullivan is recognized as one of the world’s foremost scientists and boasts an incredible career of research and exploration. Highlights include flying on three Space Shuttle missions, including the one that made her the first American woman to walk in space and the mission that launched the Hubble space telescope; serving as Chief Scientist and Administrator of the National Oceanic and Atmospheric Administration (NOAA); and being the first woman to dive to the Challenger Deep in the Mariana Trench, the deepest point in the Earth's oceans. Her ground-breaking exploration has earned her three Guinness World Records.

Like its sister ship, Scenic Eclipse (launched in 2019), Scenic Eclipse II sets a benchmark in ultra-luxury ocean cruising. The 550ft, 228-passenger (200 in Polar regions) exploration yacht is small enough to access ports and coves otherwise inaccessible to traditional cruise ships and boasts its own helicopters and submarine to give guests unrivalled access to nature during sailings. It is built to the highest polar spec, allowing it to sail ice-laden Arctic and Antarctic waters.

All Scenic Eclipse Discovery Yacht voyages are truly all-inclusive, meaning guests can relax, knowing everything is taken care of. Internal flights, transfers, fine dining experiences, premium branded beverages and once in-a-lifetime immersive excursions are all included in the price.

Scenic Luxury Cruises & Tours has grown over its 36-year plus history to include award-winning river and ocean cruises and handcrafted land journeys that take guests to many of the world’s most fascinating destinations. Since 2008, Scenic has set the benchmark for truly all-inclusive, luxury five-star river cruises in Europe and Southeast Asia. In 2019, Scenic introduced Scenic Eclipse, The World’s First Discovery Yacht, a 228-guest ultra-luxury ship, and plans to deliver a second yacht, Scenic Eclipse II, in 2023. Scenic is part of Scenic Group, which includes Emerald Cruises, Mayflower Cruises & Tours and Evergreen Tours.