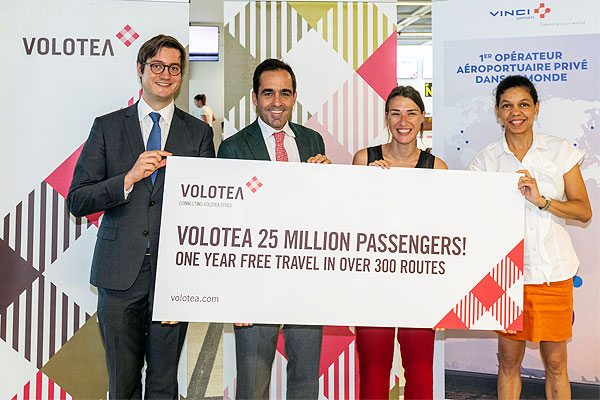 In 2019 Volotea is launching 41 new routes to serve 319 routes in 13 countries. The airline has incorporated six Airbus A319 to reach 36 aircraft this year and expects to carry between 7.5 and 8 million passengers in 2019.

Volotea, the airline connecting mid and small-sized European cities, started flying in 2012 and seven years later has reached its 25 million passenger. The airline has celebrated in Nantes airport with a special prize for the winner.

Volotea started its operations in 2012, and since then has carried 25 million passengers. Charlotte Sugliani, who was flying from Nantes to Figari was awarded with a year-long free flights prize to any Volotea destination from Nantes.

Moreover, Volotea will celebrate it until the 26th with a special promotion in its website offering 25,000 tickets from €9 to all Volotea destinations.

In 2019 Volotea operates in Nantes a total of 32 routes, 14 of which are exclusive, and offers 1.2 million seats, increasing its capacity by 10% this year.

“We are delighted to celebrate our 25 million passengers at Nantes airport, our first and largest airport in France. It is a challenge that few airlines achieve, and it represents the biggest growth among any independent European carrier launched this decade” says Carlos Munoz, Volotea’s Founder and CEO.

Volotea is the first or the second airline with the larger number of destinations in almost all of its bases. Overall it is the second largest airline in France and third in Italy in number of domestic routes.

Volotea will continue increasing its operations this year, expecting between 7.5 and 8 million passengers. For these purposes, six additional aircraft Airbus 319 had been received, increasing its fleet up to 36 units to serve a total of 319 routes in more than 80 cities in 13 countries, including: France, Italy, Spain, Germany, Greece, Croatia, the Czech Republic, Portugal, Malta, Austria, Ireland, Luxembourg and Morocco.

Volotea announces another new route from Athens to Lille

Volotea announces a new route between Athens and Palermo