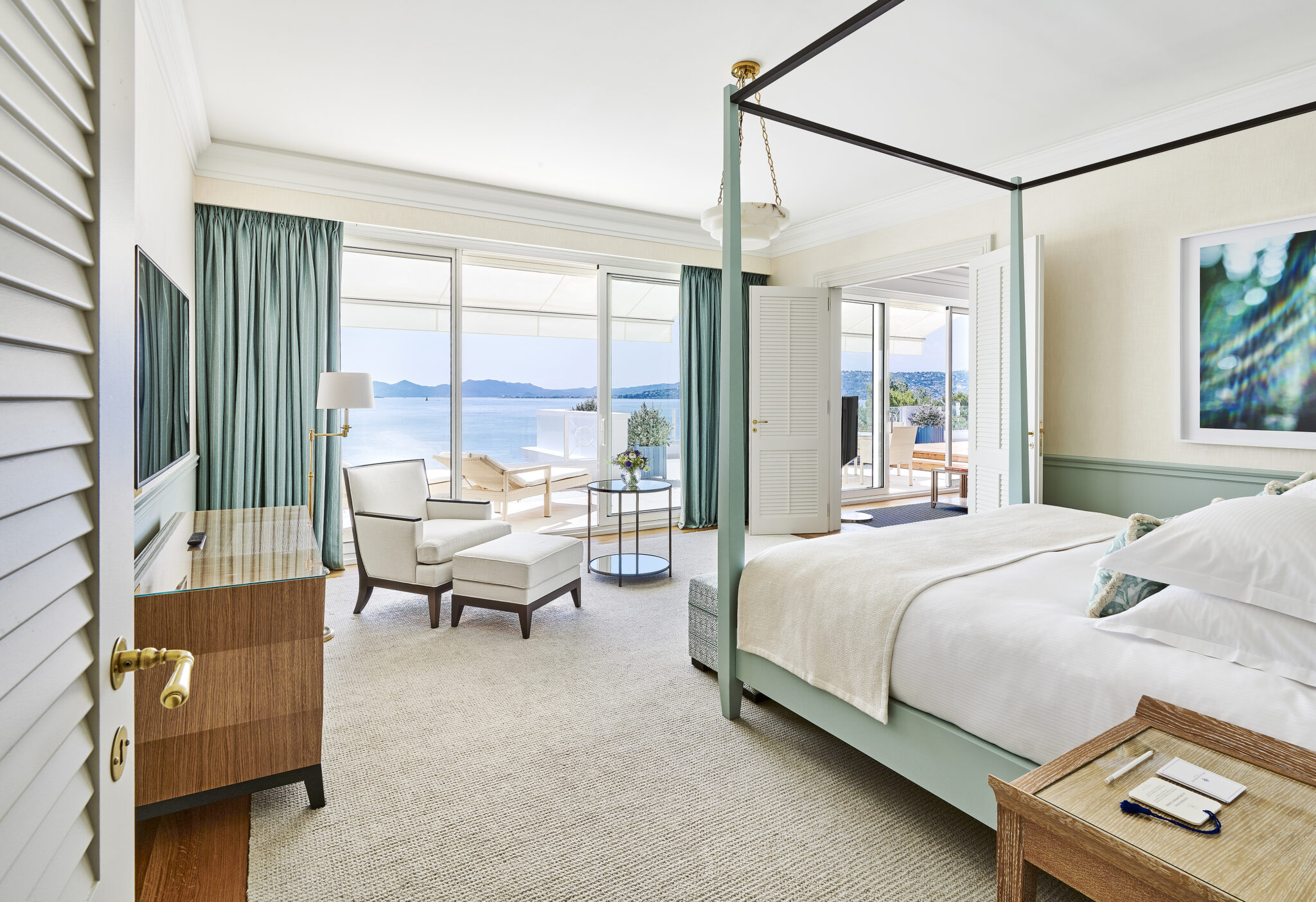 Following a process of structural remodelling for some, and comprehensive redecoration for all, Hotel du Cap-Eden-Roc will open the doors to 46 reimagined suites in 2023.

Hotel du Cap-Eden-Roc, part of the Oetker Collection portfolio of Masterpiece Hotels, will reopen on April 14th for the 2023 season with seven fewer keys than in 2022 following a thorough renovation project undertaken to modernise and expand the hotel’s suites.

Overseen by Countess Bergit Gräfin Douglas of MM-Design Frankfurt, the renovations are being performed in the Eden-Roc Pavilion, the Hotel du Cap main building and Les Deux Fontaines residence, bringing a new aesthetic and updated features to the suites in all of the hotel’s common locations.

A timeless décor speaks through Countess Bergit Gräfin Douglas’ choice of interiors by Pierre Frey, Loro Piana and Manuel Canovas, elaborated in a varied palette of blues and whites to reflect the intrinsic character of each building. Marie-Catherine Douglas of Douglas Kunstberatung GmbH was consulted to advise on the artwork throughout, which will present a mix of original postmodern and contemporary works by Andy Warhol, John Baldessari and Alex Katz, as well as other notable figures of 20th and 21st century art.

Upon retreating to Eden-Roc Pavilion’s sea-facing Junior Suites, guests will pass by a series of flower paintings by Andy Warhol in the hallway. All 31 Junior Suites are being fully refreshed with the creative input from British interior designer Francis Sultana, and Countess Bergit Gräfin Douglas has ensured that eighty percent of the suites’ decorative elements were sourced in Europe, with most coming from France.

Each boasting a direct view of the Mediterranean Sea and the Lérins Islands, the Junior Suites feature natural materials such as cotton, linen and wool in a palette of vibrant blues, pristine whites and shades of green echoing the contrast of sea, sky and the hotel’s verdant gardens.

The furniture embraces a yachting spirit in harmonious white with soft-toned wood. Two custom pieces by Francis Sultana include a private bar console and a glass and bronze shelving unit named ‘Ella’ after one of the hotel’s illustrious guests, Ella Fitzgerald. Ensuring an environment ideally equipped for the possibility of remote work, each suite in the Eden-Roc Pavilion features a writing desk by Philippe Hurel.

The Pavilion’s sensational, 100-square-metre Eden-Roc Suite is reimagined as a seaside penthouse apartment in soft tones of white, cream and sea blue. The tranquil bedroom features a four-poster bed facing the floor- to-ceiling windows overlooking the Mediterranean, while the living room invites guests to make themselves at home with the comfort of a large wrap-around sofa, a writing desk, a dining table and a well curated library. The suite’s indoors open seamlessly onto an expansive teak terrace that doubles the overall living space to 200 square metres and includes a graceful pergola and a whirlpool bath to enjoy an invigorating soak with views of the hypnotic blue sea. The Eden-Roc Suite is a truly glamorous space, ideal for hosting a private dinner.

Two paintings by New York based contemporary artist Landon Metz animate the central hallway in the main building with their expressive use of colour and shape. Stately and traditional in nature, the main building’s four new One-Bedroom Suites will blend details dating back to the hotel’s opening in 1870 – towering ceilings, crown moulding, period chandeliers, Louis XV furniture – with contemporary additions that create a distinguished harmony between past and present. In a hushed palette of cream and sky blue, the Suites will feature custom details such as a mahogany table by Maison Tallarda and carpet by Pinton, in addition to a coffee table in bronze and limestone by Alberto Giacometti.

Designed with contemporary lifestyles in mind, and out of respect for the property’s over 150-year history, Hotel du Cap-Eden-Roc’s new suites inspire a palpable feeling of ‘home away from home’.