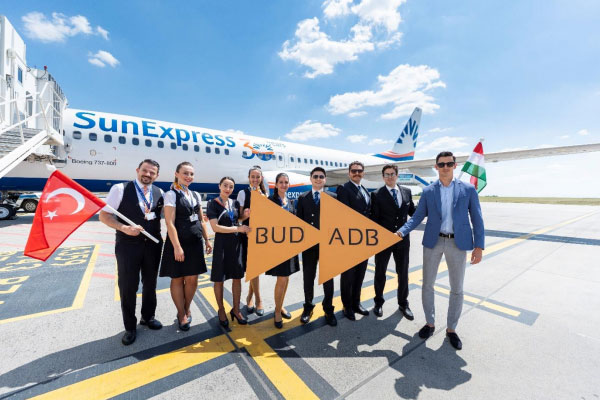 With the addition of the weekly link to Izmir, Budapest will now offer 8,356 weekly seats to four of Turkey’s airports, complementing existing services to Antalya, Istanbul, and Sabiha Gökçen.

Welcoming nearly 1.1 million passengers last month, Budapest Airport hit a new high since the start of the pandemic. With traffic 12 times higher than in the same month of last year, Budapest has further expanded its route network by welcoming the arrival of a direct link to Turkey’s third largest city (in terms of population), Izmir at the weekend. The Hungarian gateway, which now flies directly to 122 destinations, celebrated the commencement of the service with SunExpress.

Utilising its fleet of 737-800s, the Turkish carrier faces no direct competition on the 1,201-kilometre sector. With the addition of the weekly link to Izmir, Budapest will now offer 8,356 weekly seats to four of Turkey’s airports, complementing existing services to Antalya, Istanbul, and Sabiha Gökçen.

Welcoming SunExpress’ inaugural flight, Balázs Bogáts, Head of Airline Development, Budapest Airport said: “It’s always a great pleasure to welcome a new flight with an established airline partner, especially one which adds such an attractive destination to our route network. SunExpress’ service further enhances our links to Turkey to allow us to provide numerous frequencies and services to the transcontinental country.”