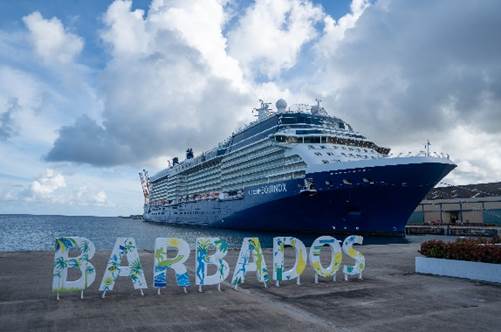 MIAMI – Cruising to Barbados is back, and the island celebrated the official arrival of the winter cruise season on Saturday, October 15th. Running through March 2023, the Barbados cruise season is the optimal time for travelers to experiences the island’s idyllic climate and warm, welcoming culture.

“We are ecstatic to welcome cruisers back to Barbados, whether they’ve visited us before or are experiencing our destination for the very first time,” said Cruise Barbados’ Senior Business Development Officer, Tia Broomes. “Barbados offers unforgettable experiences for even the most discerning of travelers, from extensive tours of Harrison’s Cave to rum tastings at Mount Gay Distillery, afternoons spent at Copacabana or private boat tours to swim with turtles.  We also are pleased to celebrate the return of many wonderful destination events this year, along with some unique new tours and activities.”

Barbados anticipates welcoming over 700,000 cruise passengers between now and March, with more than 25 cruise lines calling on the destination.  In recent weeks leading into the official start of its cruise season, the island has already welcomed two brand new ships – MSC Meraviglia and Seabourn Venture Ovation.

Known for offering the most authentic Caribbean experience, Barbados features an exceptionally rich culture and history rooted in remarkable landscapes. Rated as one of the world's sexiest beaches in 2008 by Concierge.com, Barbados' Crane Beach in St. Philip stands as a premier destination for travelers. The island itself is also the first Zagat-rated Caribbean Island and known as the culinary capital of the Caribbean. Barbados has hosted several world class events including the annual Barbados Food & Rum Festival (returning this fall), the 2006 PGA World Golf Championships-Barbados World Cup, the ICC Cricket World Cup Finals in 2007, the Sentebale Charity Polo match with Prince Harry of Wales in 2010, the ICC Twenty20 Cricket Finals for 2010, and the Rihanna LOUD concert in 2012.

A variety of pre- and post-cruise land experiences are available to travelers, ranging from picturesque plantation houses and sprawling villas to quaint bed and breakfasts and award-winning, five-star resorts. Grantley Adams International Airport offers even more non-stop and direct service from a growing number of U.S. cities, making Barbados the true gateway to the Eastern Caribbean. Barbados was voted eighth in the World by Trip Advisor's "2008 Travelers' Choice Destination Awards" in its Top 100 Destinations category.