Newsletter
HomeAssociationsThe ruling on the travel ban: A lose-lose scenario for business travel and the economy
Business travel

The ruling on the travel ban: A lose-lose scenario for business travel and the economy 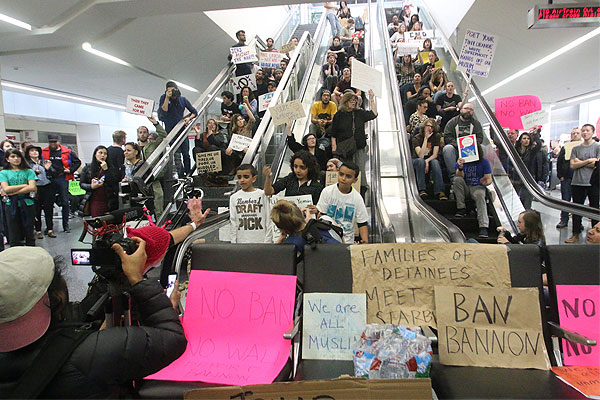 On Tuesday, the 9th U.S. Circuit Court of Appeals in San Francisco heard arguments from the Department of Justice and opposing attorneys from the states of Washington and Minnesota before they decide the fate of President Trump’s executive order banning travel to the United States from seven Muslim-majority countries.

According to Michael W. McCormick, GBTA Executive Director and COO, they can ultimately choose to reinstate the travel ban or uphold the lower court’s ruling on the temporary stay, which would likely result in an appeal to the Supreme Court. However, both scenarios result in a loss for the travel industry and the economy.

Last week GBTA polled both its U.S. and European members to assess the impact of President Trump’s travel ban. In Europe, nearly half of travel professionals reported expectations for their company to reduce business travel over the next three months and 31 percent of U.S. respondents agreed.

Based on the most recent industry data available as of February 8, 2017, the following is the estimated impact:

We say it time and again. Business travel drives lasting business growth and is a leading indicator for jobs and the economy at large.

Upholding the travel ban will clearly cause a rippling effect through the travel industry, ultimately hurting the economy. It also unleashes travel disruption like we saw when the order was first implemented. While the White House’s stated goal was acting in the interest of national security, it did not give the civil servants responsible for implementing the ban any chance to do so effectively. There was too much uncertainty and a lack of clarity around the executive order, leading to general confusion. The net effect was that business travel bookings were delayed or canceled.

There is no question that security is of the utmost importance. However, instead of closing our borders, the United States should continue to pursue and focus on expanding security programs like the Visa Waiver Program, which facilitates information-sharing among governments to ensure properly vetted travelers, making us all more safe and secure.

Upholding the lower court’s ruling is also a losing situation for the business travel industry. The initial impact has already been felt and the uncertainty it will create as we await an appeal to the Supreme Court will continue to make its mark. Advanced bookings will likely slow as travel professionals cannot be sure if and when the ban will be reinstated. Meetings and events may be cancelled altogether.

The cloud of uncertainty could leave a lasting economic impact. Large corporations and small businesses alike will suffer. The biggest driver of our economic recovery of the past seven years from the most recent downturn was international outbound travel. U.S. businesses found top line growth and business opportunity from new markets all over the world.

We urge the Trump administration to pause this travel ban action, reassess its path forward with key stakeholders and preserve both our national security AND our economy for the future.