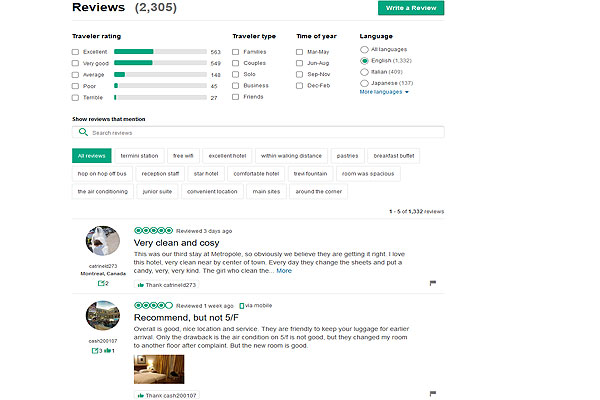 Revinate, the software as a service (SaaS) company that enables hoteliers to transform guest data into revenue, announced the release of its 2018 Global Hotel Reputation Benchmark Report. Now in its third year, this industry barometer analyzed 132 million online guest reviews from 138,000 properties across 200 countries over the last two years.

Among its key findings, Revinate’s comprehensive report confirmed a significant increase in global review volume. In 2017, guests wrote 27% more reviews, driving an increase in the average review pace per property from 28 reviews per month in 2016 to 37 in 2017.

Hoteliers responded to 29.7% of their reviews, most often to 5-star reviews (32.8%), followed by 2-star (31.2%) then 1-star (28.8% reviews). By region, Asia Pacific and Latin America outperformed the global review response average, while North America and EMEA were slightly behind.

“With this increase in review volume, we’re pleased to see hoteliers mostly keeping pace with their responses,” said Marc Heyneker, Revinate co-founder and CEO. “We’re also encouraged to see that hoteliers and review sites are getting better at driving guests to write online reviews, an effort that ultimately results in more bookings.”

As review volume increases, average ratings remain strong
Review ratings in 2017 were mostly positive. On average, global travelers rated their hotel stays with a 4.23 score, a slight increase over 2016.

Google review volume is on the rise
When examining review distribution, the report found that 74% of all reviews came from the top four review sites: Booking.com, Google, TripAdvisor, and Facebook. Booking.com maintained its lead as the top review aggregator, Facebook entered the top four for the first time, while Google experienced a spectacular increase in reviews, doubling its share compared to last year.

In summary, the online review space continues to grow and evolve. According to Heyneker, “We recommend that hoteliers use this report to benchmark their own review management practices. This report showcases how important it is to pay close attention to both emerging and established channels to maintain a strong and positive online presence.”