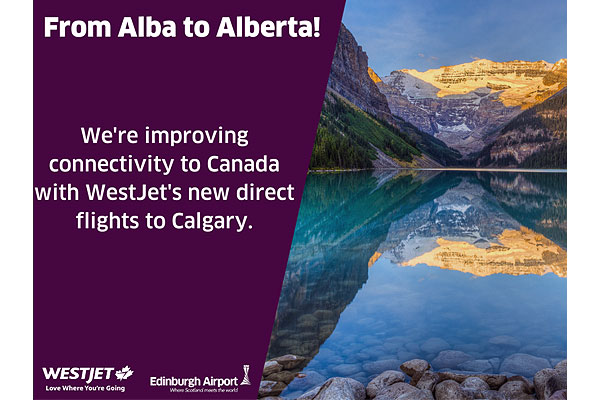 Departing Edinburgh on Thursdays, Saturdays and Mondays, route will be serviced by 787 Dreamliner and will provide another option in North America and of course open Scotland’s capital city to visitors from Canada.

A new route between Edinburgh and the Canadian city of Calgary will begin next summer as WestJet sets up home at Edinburgh Airport. The announcement sees WestJet retain its presence in Scotland and the airline will operate the three-weekly service from 17 May 2023 to 9 October, connecting the two cities for the first time.

Departing Edinburgh on Thursdays, Saturdays and Mondays, route will be serviced by 787 Dreamliner and will provide another option in North America and of course open Scotland’s capital city to visitors from Canada.

It further strengthens the ties between Scotland and Calgary, which was named after the hamlet of Calgary on the Isle of Mull – and now you will be able to fly from Alba to Alberta.

Gordon Dewar, Chief Executive of Edinburgh Airport said: “This is the first time we’ve ever had a direct route between Edinburgh and Calgary, and it is always exciting to see our connectivity expand and bring Scotland closer to major cities around the world.

“WestJet’s commitment to Edinburgh and Scotland is a show of confidence in our market and demonstrates the huge interest in both Scotland and Canada as tourist destinations as well as important business and trade links.

“We are prepared for a stampede for tickets and are looking forward to working with WestJet to make this route a success and explore further opportunities if and when they arise.”

Alexis von Hoensbroech, WestJet Group Chief Executive Officer said: "This is an exciting day for the WestJet Group, our guests, and partners as we deliver on our new strategy and increase our Calgary capacity by more than 25 per cent in 2023.

“With Calgary as home base to our 787 aircraft, access between western Canadian communities and Edinburgh will play a vital role in creating an economically prosperous aviation pipeline that better connects Canadians to Scotland and the world to Western Canada.”

The Scottish Government’s Minister for Transport, Jenny Gilruth said: “The launch of a direct service between Edinburgh and Calgary is great news for people and businesses on both sides of the Atlantic.

“We are investing in this service to make it easier to travel between Scotland and Calgary, as well as other parts of Canada and the West Coast of America, given Calgary’s role as a connecting hub for WestJet. It has the potential to create economic, social and cultural benefits while also enhancing our international connectivity.

“I also welcome the use of the Boeing 787 on the route, one of WestJet’s latest generation aircraft that will help reduce carbon emissions.

“I wish WestJet and Edinburgh Airport every success with this new service.”