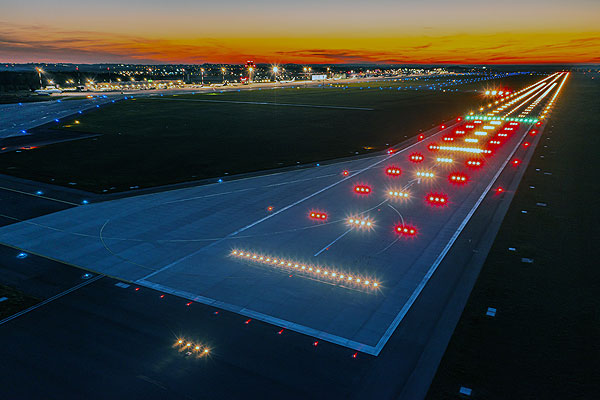 As part of the regular network handled by Wizz Air, Ryanair, Lufthansa, LOT Polish Airlines and KLM, 39 routes will be available.

On the last Sunday of October, the winter schedule of flights commences; traditionally, it will be in force for five months, to the last Saturday of March 2023. The "Winter 2022/2023" schedule at Katowice Wojciech Korfanty Airport consists of 62 regular and charter routes to 60 airports in 30 countries located on four continents: Europe, Africa, Asia and North America.

As part of the regular network handled by Wizz Air, Ryanair, Lufthansa, LOT Polish Airlines and KLM, 39 routes will be available.

During the "Winter 2022/2023" season, Ryanair will offer 13 routes from Katowice Wojciech Korfanty Airport, 4 of which are to Italy: Catania, Milan-Bergamo, Venice and Forli, 3 to the United Kingdom: London-Stansted, Manchester, Edinburgh, 2 to Germany: Dortmund and Cologne-Bonn. The airline will also handle flights to Paphos (Cyprus), Athens (Greece), Dublin (Ireland) and the biggest airport in Norway: Oslo-Gardermoen.

The regular network at Katowice Airport during "Winter 2022/2023" includes three routes handled by legacy carriers. LOT Polish Airlines allows passengers to travel from Katowice Airport to Warsaw Chopin Airport; Lufthansa offers flights to Frankfurt. The third destination is Amsterdam. It's a new position in the airport's network, one offered by KLM Royal Dutch Airlines. Flights from Katowice Airport to one of the biggest European hub airports will be handled once daily, from Monday to Sunday.

"The winter offer of low-cost flights from Katowice Airport is mainly a mix of tried-and-true routes to countries with the largest Polish emigration with typical holiday destinations, which allow for individual organization of one's vacation. The development of traditional routes fills us with joy. The debut of KLM at Katowice Airport is an important moment in the airport's history. I believe that this route will be well received by the market, and that during the next summer season the frequency of these flights on that route will double. Moreover, during the winter season, traffic on LOT Polish Airlines' flights to Warsaw and Lufthansa's flights to Frankfurt will continue recovering," said Artur Tomasik, President of the Board of the Upper Silesian Aviation Group (GTL SA).

The charter network during winter at Katowice Airport consists of 23 routes, 9 of which are long-haul destinations. Traditionally, most routes during winter are to Egypt; passengers may travel from Katowice Wojciech Korfanty Airport to Hurghada, Marsa Alam, Sharm El Sheikh and Taba. Equally rich is the offer of flights to the Canary Islands, which comprises of Fuerteventura, Gran Canaria, Lanzarote and Tenerife. Available is also Antalya in Turkey, Salalah in Oman, Dubai in the United Arab Emirates, as well as the Portuguese island of Madeira, Agadir in Morocco, and the Tunisian island of Djerba.

Long-haul routes are the jewel in the crown of the charter network. There are nine of them, six are handled with a wide-body LOT Polish Airlines Boeing 787-8 "Dreamliner." Passengers may travel on board of the "Dreamliner" to Cancun (Mexico), Punta Cana and Puerto Plata (the Dominican Republic), Bangkok and Phuket (Thailand) and Varadero (Cuba). Moreover, the offer of long-haul routes includes: Mombasa (Kenya), Banjul (Gambia) and Zanzibar (Tanzania).

"During the coronavirus pandemic, travel agencies, Rainbow Tours in particular, have noticed the potential of Katowice Airport in the area of direct long-haul charter flights. First such routes, i.e. to Mexico and the Dominican Republic, have launched in the beginning of 2021, and were later joined by flights to Cuba. The offer has proven to be a commercial success, so it is not only available in its entirety during "Winter 2022/2023," but it has also been expanded by two Thai destinations: Phuket and Bangkok. Thanks to the involvement of travel agencies, especially Rainbow Tours, as well as TUI Poland and Coral Travel, for whom flights will be handled with the "Dreamliner," Katowice Airport is the only regional Polish airport which has such a rich offer of direct long-haul charter flights during "Winter 2022/2023," said Artur Tomasik.