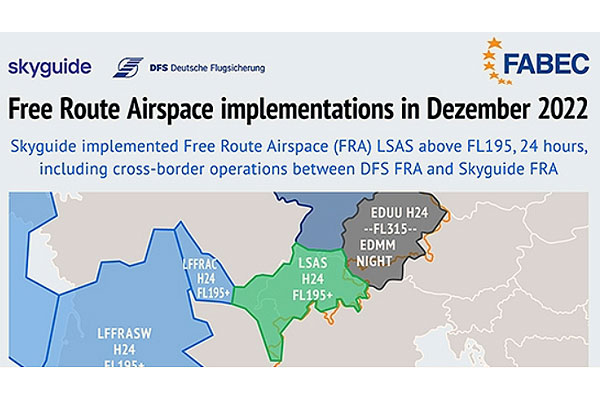 The Swiss programme follows FRA implementation in adjacent French and German area control centres, and similar procedures in Belgium, Luxembourg and the Netherlands.

To ensure airspace capacity and flight safety is maintained, FRA waypoints continue to adhere to the Eurocontrol Route Availability Document (RAD) – as under the ATS Route Network – and connections between the various FRA points remain subject to airspace availability, so can be blocked by the activation of Temporary Reserved Areas (TRAs).

The Swiss programme follows FRA implementation in adjacent French and German area control centres, and similar procedures in Belgium, Luxembourg and the Netherlands.

French air navigation service provider DSNA introduced FRA in Paris, Bordeaux and Brest in December 2021, and plans partial FRA at its two remaining area control centres of Marseille and Rheims in February 2024, followed by complete implementation in February 2025. Since
introducing FRA, DSNA reports a decrease of about 0.5% in the distances planned by operators in these regions, equivalent to between 11,000-12,500 tons less fuel use and up to 40,000 tons less carbon dioxide emissions annually. This is approximately the same as
250,000 passengers making a return trip from Paris to Nice and demonstrates how FRA contributes to efforts to decarbonize air transport.

FRA implementation in Switzerland and by FABEC partners was achieved with full cooperation and support of EUROCONTROL Network Manager and is aligned with European Commission Implementing Regulation (EU) 2021/116.

Canaries No1 winter destination, says On the Beach